Voices from the Street was a 12-week leadership program under the umbrella of Working for Change and is now currently running as a speakers bureau with graduates. 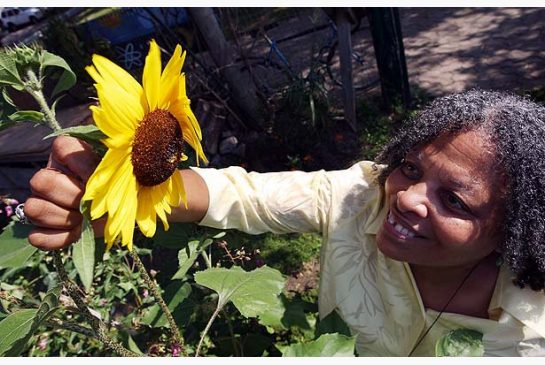 Opal Sparks checks out what’s growing in the Earlscourt Garden near St. Clair and Lansdowne. It’s part of The Stop Community Food Centre, serving one of the city’s most marginalized and under-serviced neighbourhoods. (STEVE RUSSELL / TORONTO STAR)

As I walk alongside Opal Sparks on our way to The Stop Community Food Centre’s 8,000-square-foot community garden in Earlscourt Park, she is saying, “If more money was put into producing better food, we’d be spending less on medication and it would be a preventative approach to health.”

Sparks, who suffers from a bone disease and a heart condition, is riding her bright red mobility scooter along a laneway. At one point, she dismounts and I push the scooter off the concrete and over a rough patch of land onto the grass so she can continue riding to the gates of the garden.

She can’t do much planting, weeding or harvesting anymore but she started a container gardening project in the apartment building where she shares a unit with her adult daughter and she’s a regular volunteer at The Stop.

Even though it’s late in the season, the garden is lush. Walking slowly between the beds, Sparks bends to hold aside some leaves and expose a small, papery husk. “These are tomatillos,” she says, referring to the small, tomato-like fruit that is a key ingredient in Latin American cooking.

“And there’s squash and cauliflower and green peppers and Swiss and rainbow chard. As you can see, lots of the vegetables are coming up late this year because of the rain.”

The community garden, as well as a year-round greenhouse and sheltered garden opened a year ago in the historic Wychwood TTC barn development, are only the most visible elements of The Stop. It was started, more than three decades ago, at the St. Stephen-in-the-Fields parish in Kensington Market as one of Canada’s first food banks. Now in Toronto’s west end beside Davenport-Perth Community Church, it serves one of the city’s most marginalized and under-serviced neighbourhoods and has evolved into much more than a food bank.

Last year, 16,000 people used its food-based programs – everything from cooking classes and a drop-in café to support programs for pregnant women, a sustainable food education program for schoolchildren and an outdoor bake oven where pizzas and bread are made. As executive director Nick Saul explains, “Our goal is to use food as a tool to talk about politics, the economy, social issues. We want to inspire people to get involved in advocacy related to issues of poverty.”

Earlier in the day, I sat with Sparks and Rhonda Teitel-Payne, The Stop’s urban agriculture manager, on a bench at the bake oven. At one point, a little girl runs up to Sparks and hugs her before returning to where her brother plays at a nearby playground.

Watching them, Teitel-Payne says, “That’s why we started the bake oven. There were so many kids just hanging around. As a community-based organization, we work best building relationships with the people who live in the area. Most of them are renters living in apartments or rooming houses, often on social assistance. They need to get away from the four walls so gardening is a physical and social activity that also connects them to the source of good food.”

Teitel-Payne, who has a master’s degree in social work, didn’t garden before coming to The Stop but is now deeply involved in the urban agriculture movement. “We’ve discussed whether we should just give people plots, which is the way most urban gardening projects work. In one way it makes sense, because a community garden is more labour-intensive for the staff. But there are a lot of people we serve who, because of their circumstances, couldn’t maintain their own plot for an entire growing season. So, we decided, that shouldn’t mean you can’t get your hands in the soil.”

Talking about programs offered in general, Sparks says. “The Stop teaches new social skills. A lot of us come from family dysfunction where people don’t even speak to each other. At The Stop, it’s a respectful support system and people there know how to mediate if there are problems.”

Wiping away tears, she adds: “The first time I came to the drop-in kitchen, everybody was being served as if they were in a restaurant. They were treated with dignity even though the reason they were there is because they needed to get food for free. And the food grown in the community garden is actually served to people on their plates.”

Later, at the garden, Sparks points out how it’s been made as accessible as possible. Pointing at some tall stakes painted in different bright colours, she explains, “That’s so people with visual impairment can make out which plants are growing there. And look, the paths between the rows are wider than you would normally make them so a scooter or wheelchair can get through.”

As we walk back to The Stop, Sparks says: “Many people here are used to feeling disenfranchised, like outsiders with their noses pressed against the window. Something as simple as a garden is a way of feeling part of a community.”